The Canberra show is on this coming weekend. The show runs from the Friday 27th-Sunday 1st March. The show usually has a great lineup of rides and hopefully it'll be good weather too. I'll be with the cattle there and I'll be heading down Wednesday before the show starts and will be there until Sunday. So I might get some setup photos if I'm lucky but expect the usual photos and review. This show will kick off my show season and I'm looking forward to it. Hopefully I'll try and get the lineup early this week.

The weather is good this year which is great. Johnston's had there new ride here, It's called the SEA CIRCUS. Looks good, 3 level's of fun! Best way to desribe it is a very,very nice 3 story fun factory. It is the 1st time ever put up.
x 648
Top

Does it look as good as Circus Circus, always looks great imo
Top

i've got some photos of it. i'll put my review in the thread I already made
Top

Had a good time at the show. Got to meet some new people owners, operators, workers etc. Ride lineup was:

Geez, the lineup has got smaller in recent years! I remember back when StarDancer, Turbo, Music Trip, Tornado, Scorpion, Chaos and many more used to show up. Gold Coast Show's lineup was as good as that! I look forward to seeing the pics

EDIT: I didn't see music trip in the lineup

Interesting - no Skyview Wheel. I would have thought this 'Capital' would have been a necessary money earner.
Top

Been busy got to go through all my photos. Should be up by the weekend at the latest. The Skyview did Maitland last weekend but it was going to Canberra but at the last minute pulled out. The centre sign was there behind the Sea Circus though
Top

Sorry for the lateness of the photos and review. Been a bit busy. So went down to Canberra Wednesday night and stayed until Sunday arvo. We had great weather the whole time we were there which was lucky. A pretty good selection of rides turned up this year aswell. Was nice to meet some new operators/owners/workers etc and good to see some I already met in the past. 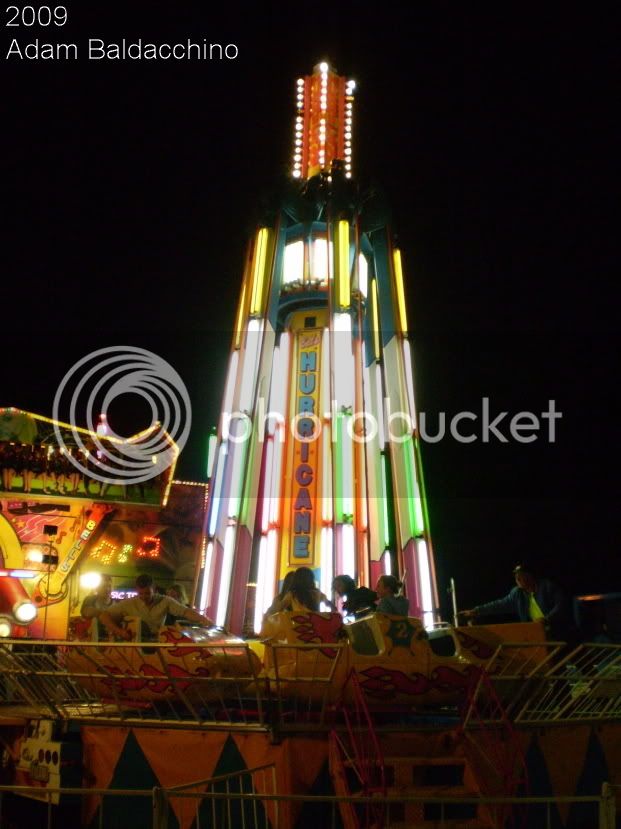 Breakdance: Man as far as presentation goes for this ride, its right up there. Bright colours all over the backwall, cars, scenary etc. At night it was well lighten up too with all LEDs on the backwall and sign. Had a ride and the cycle was a good length and spinning like mad around the floor. It gained some quick speeds too which was fun. Probably one of the most enjoyable rides I had.

Cha Cha: Was Bell's unit there and as always, as popular as ever. The ride looks fantastic bright colours splatered everywhere and all the lights working at night. Good decent cycles too and was running very fast.

The Crazy Coaster: Looking nice and clean and popular with the families. Had some new LED signs on the front of the ride which were pretty stricking at night with all different colours and the chasers.

DDS Zipper: Well this was probably the number 1 ride I was looking forward too riding. The ride is looking fantastic, the artwork, the ride itself, sign etc. But a bit of a letdown with the lights on the boom and wheels not working so I couldn't get any photos of it at night. Had a few rides over the days I was there and boy, does this machine fly. Had Dean operating for my first ride and I asked for a longer ride so thats what I got didn't I lol. We went through the cycle once then I stayed at the top while people were loaded down the bottom. Then we were off again. The ride is insane. It was alot of fun, I think I counted about 5 spins between both ends of the boom. A came off and boy I was dizzy. Not sick but just stumbling for a minute or two. A great ride and look forward to seeing it next time. Thanks Dean.

Hard Rock: As usual popular and looking stricking. Jumped on for a spin and the ride is very fun. I don't think you could ever get sick of the ride (well I couldn't anyway). Had a good long cycle spinning the gondola both ways then stopping it while being swung at full height. Had all the strobes and lights working at night which was good aswell.

Haunted Hotel: This was the first time I've seen it since its had its total makeover. And boy it looks great. Looks like it's been brought over from Europe. All the artwork looks great and at night is well lighten up. Love it how the staff get dressed up aswell like Hotel staff.

No Limit: Yeh the 5G power machine was really pulling the G's. Looking great both day and night. Broke down the first night which was a letdown for Bell's. Had to pull the tower down and everything to repair the problem. But was up and running the next day. Great long cycles and some very intense moments on there. Loved the position of where the ride was with you either swinging out over the patrons heads or nearly swooping into the trees on the other side. Playing all the jingles and pumping out the tunes aswell.

Music Trip: Bell's model was the one and boy the artwork is bright and looks fantastic. Was pretty popular too with good intereation from the operator and good long cycles.

Sea Circus: Australia's newest funhouse. And what a funhouse. All the characters and scenary on the ride look fantastic. The artwork over the ride looks good and looks great at night. Has a heap of animatrics and obsticles inside it too. Alot of kids were having ago and from what I saw they were really enjoying it. A great new addition to the Oz show circuit.

Shockwave: Haven't seen the ride for ages. Not since Joylands had it. Still looking the same and decided to have a ride. Great long cycles, good interaction from the operator and heaps of loops and being held upside down. Was popular too and was well lit at night. Was good to see the ride again and was nice to meet Reece Flaherty and his wife.

Short's Zipper: Was probably more popular than Davis' Zipper but being in the better position on the midway we can see why. Was well presented, had a new sign down the bottom and new lights put on the wheels. Was pretty good cycles on there too but didn't have a ride.

Speed: Haven't ridden the ride since RES. Was pretty popular aswell. Love the colours of the lights on the ride at night too. Had all purple and a yellowy/greeny colour along with the blue up the arms. Had a ride and a good ride cycle. I noticed the ride shuddered a bit when it was gaining speed but after that it was all good. Good feeling flying through the air and great views of the midway, would've liked to have taken my camera up.

Thunderbolt: Another favourite and popular too. Had just had a new drive system put in so its now an electric drive instead of hydralics. You'd think (well I thought) that it would've slowed down the ride, but wasn't I wrong, the ride has all programs now aswell. But great long programs and cycles and the ride was operating at some serious speeds. It's never been that fast whenever I've experienced it before. But in both directions it was travelling very fast. Looked great as always and good interaction from the operators.

Young's Hurricane: Didn't have a ride but looked the same but still good. Good decent cycles too.

Had a great time down there, sorry for the late post. Enjoy

Great review. If I were there I probably would have spent the whole time riding both Zippers and Hurricane over and over.........and maybe a cha cha ride or two with some no limit thrown in as well...hehe. Nice photos. Oh, I forgot about Hard Rock and Thunderbolt as well!!!!! I wish I could have been there now.
Top

Hmm... does anyone find it odd that No Limit's Control panel is OUTSIDE of the booth?! That was a bit of a WTF moment there haha.

Thanks TopGunner.Dean must have been pissed about Zipper's lighting...after he put so much effort into making it look as good as it does.I noticed the lights periodically cutting out at Traralgon too.I hope I get to see and ride Breakdance and Thunderbolt soon...hmmm,maybe I'll have to get to Melbourne this year,just for those.

Thanks for those comments. The No Limit's control panel is taken out so the ticket box is facing the street rather than it facing the south. I don't know why but they usually just keep it in even if its facing away from the midway. Still If I was operating I'd rather be outside nice and open rather than being stuck inside the ticket box.
Top

Awesome review Topgunner. Hey, ive never really heard an answer on this. But why is the fan on all Capriolo's, Rafales etc? Is it just for show or does it acually do something.. Sorry if thats a stupid question but you wouldnt think a fan could do much for the ride. It does look good but.

Na its no stupid question. I used to wonder when I first saw the ride too. It's just a decoration, doesn't move the ride in anyway. I like it, would be a bit boring when starting the ride hearing nothing, sounds better with the fans
Top

When on earth did Shorts get soo lazy with their ZIPPER sign that they just put holographic sticker over it.... that's really not cool
Also Sea Circus isnt at moomba, its ANOTHER 3 story funhouse, being MAGIC CIRCUS.... wonder who owns it?
Great photos also mate!

In regards to No Limit's fan, I am fairly sure that it helps to move the arm a TINY bit when it is at the top. For example if it is going a bit fast and the operator doesn't want it to do a full rotation, it powers up more to give it that extra little push backwards. I don't think Mondial would have put it on there if it did nothing, that would just be stupid.

I've read its just a decoration, and yeh it might help slightly but it doesn't do all the driving power
Top

Hurricane wrote:I don't think Mondial would have put it on there if it did nothing

On the converse, I couldn't see a fan being a critical element to the operation of a multi-ton amusement ride. Putting it on there for decoration doesn't surprise me at all, makes for a much more interesting counterweight than a big block.
Top

No it's definately not a decoration - it contributes power in assisting the acceleration / braking. Just stand in front of it and listen and you'll see it's no decoration
Top

Ahh ok, thanks Zamperla. At one stage I did think that it was for a bit of power
Top

this is all a big joke right? theirs no way in the world that propeller does anything other then a cosmetic feature.
Top
Post Reply
33 posts